In April's "Tip of the Month," we will present a set of correlations and simplified charts for estimating sour gas water content directly without having to look up the water content of sweet gas. These correlations are based on the Wichert and Wichert chart (Figure 20-9 of the GPSA data book) and Wagner and Pruss water vapor equation and Bukacek correlation for estimating sweet gas water content. The proposed correlations are valid for pressures up to 24 MPa (3500 psia), temperatures up to 175°C (350°F) and H2S equivalent concentrations of up to 50 mole %. The accuracy of the proposed correlations was compared against limited experimental data and a rigorous method using an equation of state.

Team members from PetroSkills Middle East recently participated in the hugely successful 2015 MEOS conference at the Bahrain International Exhibition & Convention Centre. Attendees to the conference, which is organized by the Society of Petroleum Engineers, represented many regions throughout the world.

In this edition of our Tip of the Month series, we reflect back to December 2008, and get a reminder from the United States Chemical Safety Board (CSB) to remain focused on process safety and accident prevention during this time of lower oil prices. During the economic downturn of 2008, oil prices dropped significantly. The latest drop in crude oil prices is similar. At that time, the CSB produced a video message asking companies to stay focused on process safety. That message is still very relevant today.

In this Tip of the Month (TOTM) we will discuss how to determine CO2 solubility and flashing issues in water at pressures and temperatures commonly associated with gathering systems and production facilities. This is mainly important for CO2 Enhanced Oil Recovery (EOR) floods as the CO2 concentration is high and the initial separation is at higher pressures than is common in non-CO2 EOR oilfields. These two conditions result in significant dissolving of CO2 into the produced water with resultant flash gas from downstream Free Water Knockouts (FWKO), treaters, and tanks. In mature CO2 EOR floods with Water-Alternating-Gas (WAG) injection schemes, it is likely that most of the flash gas in the downstream separations will be from the produced water. While this TOTM is significant mainly for CO2 EOR floods, the following analysis is general in nature; it would apply to other situations involving CO2 solubility in water issues. This analysis assumes that there is no H2S. H2S would have somewhat higher solubility than CO2 which would force more gas to flash from the FWKO and tanks. Higher H2S than about 5% would begin to appreciably increase the solubility of H2S into water. 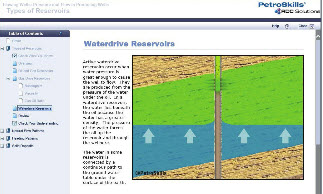 (TULSA, OK) Feb. 2nd, 2015 – PetroSkills has introduced ePetroTM, a new series of online learning programs for petroleum professionals. Designed to provide the industry knowledge required by professionals in the oil and gas industry, the new libraries are developed to the same exacting standards and in complement to the ePILOTTM online series for technical operation−over 800 hours of technical skills and safety training used at over 500 sites worldwide.