Molecular sieves are used upstream of turboexpander units and LNG facilities to dehydrate natural gas to <0.1 ppmv. In the natural gas industry, the molecular sieves employ heat to drive off the adsorbed water. The cyclical heating/cooling of the adsorbent results in a capacity decline due to a gradual loss of crystalline structure and/or pore closure. A more troublesome cause of capacity decline is contamination of the molecular sieves due to liquid carryover from the upstream separation equipment. Because of the capacity decline curves flatten out, available standby time may be able to extend the life of a molecular sieve unit when your unit is operating on fixed cycle times. Other operating options include: running each cycle to water breakthrough; and, reducing the cycle times in discreet steps throughout the life of the adsorbent. To illustrate the benefits of standby time, a case study was evaluated and the results are presented. 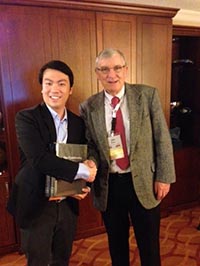 PetroSkills is proud to have recently participated in the Gas Processors Association’s Annual Convention, April 12-15 in San Antonio, Texas. The Convention had more than 2500 Midstream in attendance, collaborating on such topics as facilities design, product specifications, pipeline safety and operations and maintenance.

In April's "Tip of the Month," we will present a set of correlations and simplified charts for estimating sour gas water content directly without having to look up the water content of sweet gas. These correlations are based on the Wichert and Wichert chart (Figure 20-9 of the GPSA data book) and Wagner and Pruss water vapor equation and Bukacek correlation for estimating sweet gas water content. The proposed correlations are valid for pressures up to 24 MPa (3500 psia), temperatures up to 175°C (350°F) and H2S equivalent concentrations of up to 50 mole %. The accuracy of the proposed correlations was compared against limited experimental data and a rigorous method using an equation of state.

Team members from PetroSkills Middle East recently participated in the hugely successful 2015 MEOS conference at the Bahrain International Exhibition & Convention Centre. Attendees to the conference, which is organized by the Society of Petroleum Engineers, represented many regions throughout the world.

In this edition of our Tip of the Month series, we reflect back to December 2008, and get a reminder from the United States Chemical Safety Board (CSB) to remain focused on process safety and accident prevention during this time of lower oil prices. During the economic downturn of 2008, oil prices dropped significantly. The latest drop in crude oil prices is similar. At that time, the CSB produced a video message asking companies to stay focused on process safety. That message is still very relevant today.