Reservoirs are petroleum accumulations within porous and permeable traps. Petroleum (oil and gas) reservoirs exist predominately in sedimentary rock systems although occasionally reservoirs have been found in igneous and metamorphic rocks. For a new reservoir project development, most critical facilities, early completion planning, and reservoir exploitation decisions must be made when there is a minimum amount of data available for making those decisions. Reservoir engineering and well testing operations disciplines significantly influence and guide production operations. In this article, you will learn more about the role of reservoir engineers, petroleum reservoir formation and occurrence, and distribution of hydrocarbon fluids in traps. Additionally, you will discover the most common sedimentary rock types associated with petroleum reservoirs and examine reservoir pressure and temperature.

The Purpose of Reservoir Engineering

It is the core responsibility of the reservoir engineering discipline to learn as much as possible about reservoir fluids and their flow capacities through the rock matrix, in which they are trapped. Reservoir engineers conduct studies, tests, sampling runs, modeling exercises, and other activities in an effort to provide a clear understanding of the properties of the reservoir fluids. These properties change over time, and reservoir engineers must understand to what degree they change. This includes as the fluids move from within the reservoir, into the bottom of a producing well, into the tubing string and up the well, through the tree and choke, into gathering lines, and finally to the entrance of the first-stage separator. In addition, the reservoir’s unique and operative drive mechanism is changing as reservoir pressure decreases over time, at constant reservoir temperature. Reservoir engineers spend considerable time planning and gathering data early in the producing life of a hydrocarbon accumulation, with the express purpose of defining exactly what is occurring in the reservoir. Having such information in hand makes the medium- and longer-term planning of a well completion’s life more readily manageable, technically accurate, and doable. Especially when later decisions concerning workover and artificial lift planning are made.

Reservoir engineering has been defined as “the art of developing and producing oil and gas fluids in such a manner to maximize reservoir economics.” The definition has a broad and varied meaning, but the goal of ultimate hydrocarbon recovery and maximum revenue generation are closely linked. Before establishing a plan to produce a reservoir, the development engineers must understand key parameters about the subject reservoir: 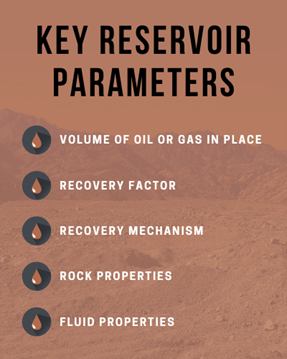 Only with a good understanding of these variables can the engineering team plan and execute an efficient job of drilling, completing, and producing wells, to efficiently recover the maximum volume of hydrocarbons from a reservoir.

There are three requirements which must be met before a petroleum reservoir can exist. These are: 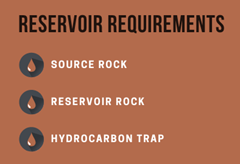 Source Rock: The primary theory accepted for the generation of hydrocarbon is that it is formed by organic evolution. This is a result of the decomposition of vegetable and animal organisms that lived during previous geologic ages. The accepted scenario is that organic material was deposited at the bottom of seas and lakes, and was later subject to the deposition of fine sediments over a period of time. At depths where anaerobic bacteria can prosper and thrive in the absence of oxygen, deposits are rich in carbon and hydrogen. Many oil and gas fields in various parts of the world are found at the depths of current continental shelves of ancient seas and lake beds. 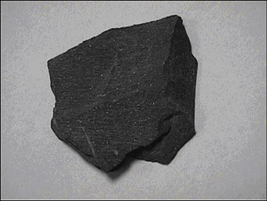 Fig. 1 – Marine shale, an example of a shale source rock.

Fig 2. – Example of a reservoir rock including petroleum migration and entrapment.

Hydrocarbon Trap: Traps must also exist to trap the hydrocarbon in place forming a hydrocarbon reservoir. The fluids of the subsurface migrate according to density. As previously discussed, the dominant fluids present or potentially present are hydrocarbon gas, hydrocarbon liquid, and salt water. Since the hydrocarbons are less dense than the salt water, they will tend to migrate upward to the surface, displacing the heavier water down elevation. These fluids will continue to migrate until they encounter impermeable rock, which will serve as a reservoir seal or trap. If impermeable rock does not exist, the hydrocarbons will migrate to the surface and be dissipated into the environment in geologic time. See Figure 2 for an example of a trap.

A reservoir is that portion of a trap that contains oil and/or gas as a single hydraulically connected system. And, many hydrocarbon reservoirs are hydraulically connected to various volumes of water-bearing rock, called aquifers. A typical reservoir rock is porous and permeable, which means that the pores interconnect so that fluids can migrate through the rock. When “reservoir fluids” is used, the meaning of the term “fluids” is defined as reservoir oil, gas, condensate, and water.

Distribution of Hydrocarbon Fluids in Traps

Porous rocks contain oil, gas, and water within the connected permeable pore space. Gravitational and capillary forces largely control the distribution of these fluids in petroleum accumulations. As oil and gas are lighter than water, the upward movement of petroleum must be restricted in order for hydrocarbon to accumulate at depth. That is, a natural barrier or trap must exist for petroleum accumulation to form. The reservoir rock must be overlain by impermeable beds so that oil and gas accumulation cannot seep from the trap and migrate to higher beds in the stratigraphic sequence.

Gravitational forces cause the lighter fluids to rise to higher positions in the trap. Capillary forces, on the other hand, cause a wetting fluid to rise into pore space containing a non-wetting fluid. Water is a wetting fluid with respect to oil and gas, and oil is a wetting fluid with respect to gas. Even though capillary forces counteract the force of gravity in segregating the fluids, an equilibrium exists between these two forces before any disturbance occurs, such as a drill bit penetrating a trap. A typical fluid distribution in a trap is illustrated in Figure 3. 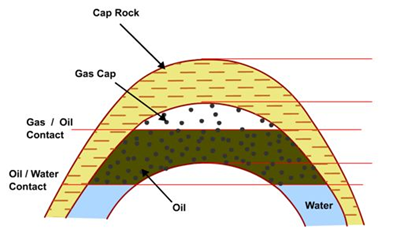 The following are the three possible modes for gas occurrence in reservoirs:

1. In some reservoirs, only oil and water are present at the reservoir’s pressure and temperature conditions. Between a reservoir’s oil and water zones, there is a section of the vertical column referred to as an oil-water transitional zone. Natural formation water, or connate water, is present in the pore spaces of the rock in the oil zone with increasing depth. In the water zone, these pore spaces are fully saturated with water. In this type of reservoir, natural gas occurs as solution gas, and is evident or present only when reservoir pressure sufficiently decreases, and gas breaks out of the oil. 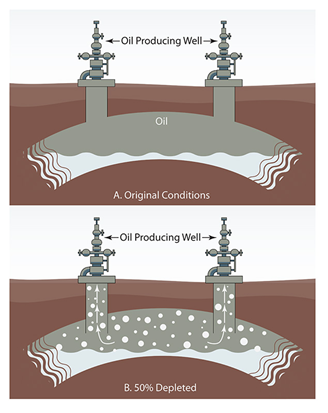 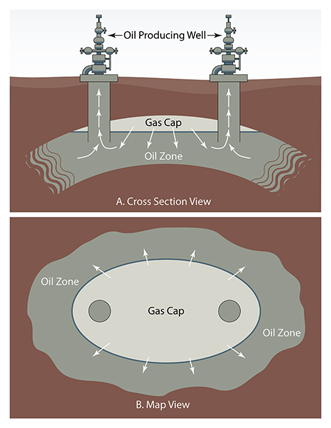 3. In still other natural gas reservoirs, the gas zone structurally is above a gas-water transition zone. The gas zone often contains connate water saturation, which increases with depth, to eventually become a completely water saturated zone. The gas in this type of hydrocarbon accumulation is referred to as non-associated gas, as there is no oil present. 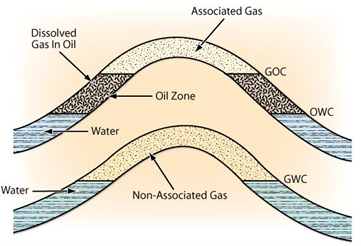 The most common sedimentary rocks associated with petroleum reservoirs are: 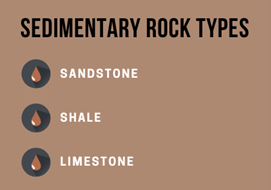 Figure 7 shows the lithologic relationship of these common rock materials, indicating the transition from one type of rock to another, and the composition and nomenclature of multi-compositional reservoir rocks.

WHICH OF THE FOLLOWING DIAGRAMS IS MORE ACCURATE?? 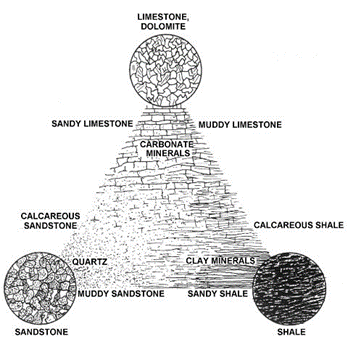 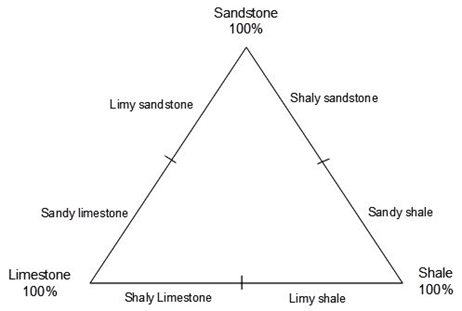 (Classification of the common sedimentary rocks by mineral composition)

The pressure at depth is usually expressed as:

Gradients within the range of 0.433 to 0.5 psi/ft are considered normal. Abnormal pressures can occur when some part of the overburden load is transmitted to the formation fluids during major tectonic events. Abnormal pressures caused by closure of rock structures may lead to very high gradients (0.8 to 0.9 psi/ft), and may even approach the geostatic gradient of 1.0 psi/ft.

Because of the large thermal capacity of the rock matrix, conditions within the reservoir at any single depth across the reservoir may be considered isothermal in most cases.