The Nord Stream 1 & 2 Subsea Pipeline Projects are a tremendous feat of engineering.  In a previous Tip of the Month [1], we discussed the technical aspects of the Phase Envelope, and its corresponding Dense Phase, Hydraulics, Diameter selection, Pipe wall thickness, pressure gradient profile, and flowrate for these multiple parallel pipelines.

This Tip of the Month will present some context and comparison of the magnitude of some of these numbers. It also highlights why an “ALL OF THE ABOVE” Energy strategy is needed.This action includes Nuclear, Wind, and Solar Energies, and the Natural Gas volumes to provide low energy costs and low carbon dioxide emissions.

-One Onshore Compression Station at the inlet.

-One Onshore Compression Station at the inlet.

Both pipelines provide gas to Europe from Russia through an onshore connection in Germany.  This demand is currently being provided by natural gas flowing from Russia through Ukraine. Ukraine receives compression and transportation revenue of $730 Million USD/yr. Nord Stream 1 matches the capacity of existing onshore pipeline infrastructure.  So as a producer why does it matter to Russia if they ship gas to Europe through existing infrastructure or the Nord Stream?  Why build unnecessary capacity? 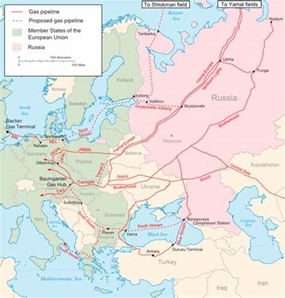 How Big is Big?   Answer: Larger than you probably realize:

According to the Guardian, Nord Stream 1 gas deliveries to Germany is generating revenue of $220 Million USD/ day to Russia. The project currently generates $80 Billion USD/year with only Nord Stream 1 online [4]. In 2010, Nord Stream 1 was found to have the lowest levelized unit transportation costs to move natural gas to western Europe, as compared to other existing options [5].  At the time, this may have been a factor in the decision for Europe to become heavily reliant on Russian gas; it was the lowest cost option. Nord Stream 1 capacity is roughly 75 million standard (std) cubic meters per day, or roughly 27.38 billion std cubic meters per year. [6].  Germany receives roughly 55% of its gas from Russia, much of which is sourced from Nord Stream 1.  By volume, Germany relies on Russian gas more so than any other European Country. [4]

The Nord Stream 2 (N.S. 2) capacity is roughly 55 billion std. cubic meters per year. The estimated cost of the pipeline is $11 Billion USD.  The project payout would have been only 50 days if the pipeline certification had not been halted due to Russia’s military operation in the Ukraine.

N.S. 2 would have provided enough energy for approximately 26 million households a year in Western Europe. The project would have supplemented Germany’s natural gas supplies, but most of the gas would have supplied Austria, Italy and other Central and Eastern European Nations.

What are the alternatives now that N.S. 2 has been stalled?

Given the current political uncertainty, what are the options?

You may not realize how large this volume of natural gas is.

A Quick answer is to replace it with LNG.

At the projected gas rate of N.S. 2, it would require 600 to 700 LNG tankers per year [8]. For clarification purposes, the widely accepted criteria for the condensation of Natural Gas to liquefied LNG is set at 600 scf gas/ft3 LNG.it must be remembered that this is only an estimated value. The actual condensation ratio is a function of the Molecular Weight of the gas, and the cryogenic, LNG , liquid density. The range is usually 580 – 620 SCF Gas /ft3 LNG (scm Gas /m3 LNG).  In import – export monetary tracking, the correct   liquid yield is essential.

So new tankers need to be built as well as regasification facilities in onshore Germany, and in other locations in the UE.  Long Term Contracts with LNG Suppliers need to be secured.  Current estimates are that this could be accomplished by the end of the decade 2030.

Nuclear Power has the highest energy density, and no CO2 emissions. Germany’s last reactor is scheduled to be shut down by the end of this year. This leaves a major gap in eliminating a large amount of electrical generation with no emissions that must be filled with replacement solar and Aeolic energy sources. It has been found that eliminating nuclear power generation is actually increasing emissions, which is in direct conflict of the overall net-zero energy goals of the EU.  Watch: How fear of nuclear power is hurting the environment | Michael Shellenberger - Bing video [8]

Another option may be restarting Coal Power Generation Plants if they have not already been dismantled, and the employees retired or redeployed.

To quantify the amount of energy that N.S. 2 could transport, let’s burn the natural gas in modern power generation facilities to convert that energy into MW for a comparison with wind turbines.  The pipeline would have transported roughly 5.321 billion std. cubic feet per day of natural gas.

Currently Germany’s installed onshore wind capacity is roughly 28,230 onshore turbines with a combined capacity of 56 GW (56000 MW) [9].  To replace the gas flows in N.S. 2 would require that Germany install 17, 389 4 MW wind turbines, or roughly 56% of their current installed capacity.

The estimate on the number of solar panels required is complicated, but one rough estimate would be a Solar Array 40 miles by 40 miles.  The problem with wind and solar is that reliable back up is needed due to their intermittency.  Solar only generations electricity 25% of the time under the best conditions, cannot fill the gap by many orders of magnitude, or the world stands still on a cloudy windless day or night [10].

Unfortunately for Germany, their problems largely reside on the reliance of gas flows from Nord Stream 1, which has been reliably producing natural gas through the duration of the Ukraine conflict.  For how long the gas will flow, remains questionable.

According to the EIA, in 2019 [11] Germany was the largest energy consumer in Europe, and the 7th largest in the world. It was also the fifth-largest economy in the world by gross domestic product (GDP) by purchasing power parities after China, the U.S., India and Japan [11].  Germany consumes roughly 8.4 bcf/d of natural gas, with the gas flowing from Russia, the Netherlands, and Norway.  In 2020, Russia provided 55% of the imported natural gas to Germany [12]. That is roughly 4.62 bcf/d, which is slightly below the comparisons that were made for the N.S. 2 pipeline flows.

Germany has 45 natural gas storage facilities that are currently 26% full. The short-term plan is to get through this winter season, and to buy gas for storage until 80% full to allow them to get through the winter at the end of this year.  Ukraine has begun to send natural gas from its storage facilities to Europe April 2022. Onshore Transportation and Compression of Russian Gas through Ukraine provided a $730 Million USD/yr revenue source for Ukraine. [3]

Germany cannot afford to embargo Russian Gas with a solution a decade away, and they are at risk for a curtailment by Russia at any time by simply partially closing a couple of valves. Currently they are in the process of determining a three-point emergency plan for when the natural gas flow does stop, and none of these solutions will prevent the massive economic damage that will unfold.

They are currently faced with the prospect of shutting down their industrial engine causing massive economic impact which will be felt globally considering their contributions to the global economy and supply chains.

In January 2007, a Deutsche Bank report warned Germany that closing down its nuclear plants would cause a drastic increase in emissions, higher electricity prices, increased blackouts, and force a dependence on gas imports from Russia to make up for the energy gap. In 2021, the results are in. Germany has the highest electricity prices in Europe, and this is only set to increase this decade. By 2025, Germany will have spent $580 billion in renewables investment. But despite that, its electricity production is 10 times more carbon emissions intensive and twice as expensive as France, which has decided to keep nuclear energy. [14]

Germany currently does not have many good short term / long term options.

The title of this TOTM does not refer to the multiple parallel pipelines. It refers to an axiom that James Langer, one of the authors, has used his entire life as a project manager and in personal decisions...

When the future is uncertain, and the stakes are high….

·       Never burn bridges.  You may need them to safely retreat and regroup.

·       Believe in Science, not Political Science.  You cannot change the Laws of Thermodynamics with an executive order.

·       Another amazing fact is that former German Chancellor Angela Merkel has a degree in Physics. 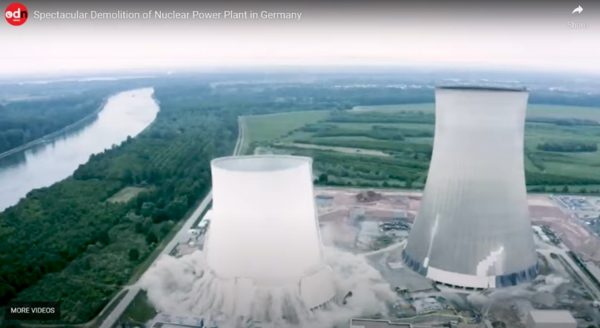 Germany had 6 nuclear power plants. 3 decommissioned last year and the balance for 2022.

Remember the advice not to burn bridges?  The strategy used in demolishing existing nuclear plants is similar to that used by the Spanish explorer Cortez when he burned his ships on arrival in the New World.  It ensured no turning back.

(10) U.S. Natural Gas and Renewables- Is this the end of fossil fuels? TOTM Dec 2019, Kindra Snow-McGregor

(14) Germany Has a Math Problem, and It’s about to Get Worse – AICGS